When to Use Dialogue in a Paper 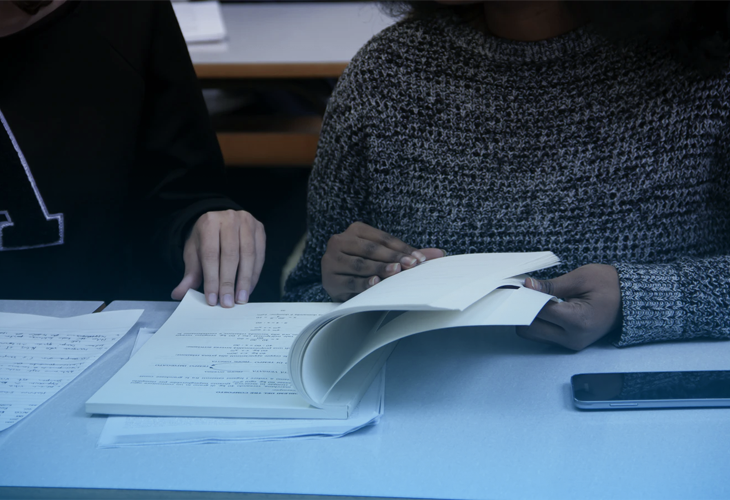 A compelling dialogue has proved to be a difficult task for both schoolchildren and students. As a rule, no one really teaches the average student how to use dialogue in their essays. A professor, for instance, expects a student to use reliable and verified sources, not unqualified people’s words, and a teacher usually doesn’t even try to go as far as showing his or her pupils the art of narrative writing. Meanwhile, well-written dialogue is an extremely powerful weapon capable of helping an author to make their point clear where others have failed to find the right words. For that reason, an additional explanation of the topic is essential.

This article starts with a theory about why, when, and how to write dialogue in your essay. If you’re more interested in technical aspects, mostly meaning formatting rules, feel free to jump to the later parts right away.

Using parts of other people’s everyday conversations in your paper is the most appropriate in the case of writing a narrative essay. Dialogue lines are extremely popular in fiction, too, but in this article, we’ll be avoiding this part because that’s not why you’re here. Narrative essays do have much in common with fiction books (they’re about compiling a story, anyway), however, don’t throw them away completely.

Trying to use dialogue in essays of other types might frustrate your reader and even destroy the whole opinion about a paper. To make it clearer, let’s say you’re dealing with an argumentative essay. Your goal, in that case, is to support your opinion with evidence. Referring to your best friend’s words is not enough to prove something to the average reader, but established facts will do it perfectly. If you still think that their words will help to prove your point, use direct quotes; no use trying to re-create your conversation on paper.

Why one should use dialogue in a paper

Because everything else might be not enough. Any creative essay is about what you think and how you convey your ideas to people; it’s where your skills really matter. Writing dialogue is just another way to get the work done by setting the scene, describing the characters, and letting the reader feel the moment as if they’re a part of the story, too.

Using different instruments to reach a goal, whatever it may be, is what determines a good writer from an ordinary one. Dialogue helps to create an emotional connection between the reader and the author, make it easier to develop common ground between the two, even in a situation when they’ve never talked to each other. All things considered, inserting dialogue is a great way to ensure that your paper will receive no less attention than other student or pupil’s one.

People today don’t take creative essays too seriously, considering them a simple way to get a high grade with a poorly researched work, but they should. Life gets a whole lot easier when you’re eager to try different approaches, after all.

If you choose direct dialogue, you should write it in such a manner as to tell the reader word for word exactly what a character said. It becomes a little complicated when you don’t remember a conversation with your friend that much, for example, but the trick is simple: try to be as accurate as possible, add some fictional parts if you remember the main point but not exactly what a person said, and let it be.

An example of a direct dialogue line, therefore, would look like that:

“I don’t want to play the game anymore,” the girl said.

We’ve used quotation marks in this example. That’s the only correct way to deliver a direct message, so don’t ignore them while writing. We’ll talk about formatting rules more very soon.

Indirect dialogue focuses the reader’s attention on the fact that you don’t remember a character’s speech word for word, or that you’ve decided purposefully to leave some things out. When you talk to your friends about what a certain person said, you usually don’t bother about the details. More often, it’s like the following example:

Her father said that she should be preparing for the graduation exams.

The easiest way to understand the concept of indirect dialogue is to remember the three following words: “One said that …” The words may change (“She shouted that …”), the “that” part may be omitted because it’s implied anyway (“They said we didn’t deserve it”), but the structure is always the same.

From the formatting point of view, writing direct dialogue is mainly about quotation marks, commas, and periods. While the first doesn’t give a writer that much trouble — you only need to enclose a direct speech in quotes; after all —, there is always room for mistakes with the other two. Let’s look at the following example:

“You don’t know what you’re talking about,” she stated.

Please pay attention that the comma goes before the closing quotation mark in our example. Inserting the former after the latter would be a mistake, and you should avoid it in your writing. Happily, the rule is consistent with the other punctuation marks, including a period. Here are more examples:

John sighed and said, “I’ve been preparing for the graduation exams for a full week. I deserve some rest.”

Mary seemed unimpressed. After a short pause, she asked, “Are you sure you can handle it?”

So, it’s pretty simple: when a punctuation mark is a part of a quoted sentence, you should leave it between quotes. The concept is important to understand because you may encounter something like that:

What did you feel when an operator said, “I do apologize… but your card is declined”?

In this example, the question mark is a part of the main sentence, not a direct speech. It feels as if it would be difficult to make a mistake here, but once you’ve gotten a grasp of the basic rules, it becomes too tempting to turn your brain off and start writing everything on autopilot. Please, try to avoid that.

In other words, single quotations marks actually have a purpose — they save your reader from frustration when you decide to create a speech inside a speech. Do not abuse this trick, though, as it still affects readability adversely.

What if I need help?

You may ask a professional creative writer for help. Writing strong dialogue is not a simple task, and sometimes it’s better to contact a more experienced person. Learning from him or her, you can develop proper writing habits from the start, which would certainly help you in the near future. A professional writer’s assistance guarantees that you will receive a great, unique, and properly formatted paper in no time.